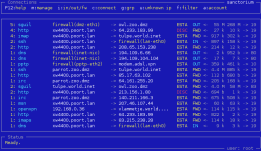 I just released a new Vuurmuur version. The last release was in 2009, so it has been a while.

This release adds basic IPv6 support. The state of the IPv6 support is incomplete, but quite functional.

I’ve been running it myself for a couple of months w/o major issues, so it should be safe to test.

Also new in this release is the support of NFLOG for the traffic log. This means no more cluttering of messages or other system logs. Much of this work has been done by Fred Leeflang.

It’s now also possible to use a “zone” directly in a rule. For Every network in that rule a set of iptables rules will be automatically be created.